Many people suffer from the symptoms of acid reflux. This is usually described as gastric acids from the stomach which rise up into the esophagus. This causes a burning sensation in the chest which many people refer to as heartburn. 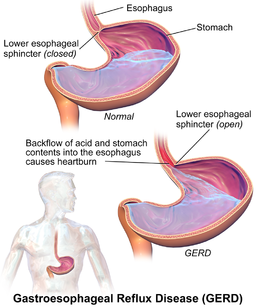 If left untreated, acid reflux can cause damage to the esophagus which could possibly lead up to esophageal cancer. When the acid moves up into the esophagus the burning sensation you experience is actually causing irritation to the lining of the esophagus. People who have chronic acid reflux will usually keep this irritation because they never have a chance for it to heal. Continuous irritation can lead to permanent damage.

Occasionally everybody will get heartburn but this does not mean they have acid reflux. Simple heartburn is usually easy to treat with Tums or Rolaids and may be associated with eating a large meal or a meal which is high in spices. If heartburn begins to occur on a regular basis, such as two or more times a week, there is the probability that acid reflux has developed.

Anyone who is experiencing symptoms needs to take notice and try to take steps to avoid them. For many people a small change of habits will solve the problem. When you eat, our stomach produces acid to help in the digestion of the food. Try to avoid eating just before bedtime. You should allow your body two to three hours to digest the food before lying down. The same goes for taking a daytime nap.

Try not to eat a large meal. The more food you eat, the more acid needed to digest it. Eating smaller meals on a more frequent basis is best for acid reflux as well as an aid in weight control. Try not to eat foods that are high in fat. Limit caffeine intake; this includes chocolate, coffee, and cola. Avoid spicy foods including tomatoes and foods that contain tomatoes. Citrus foods such as orange and lemon are high in acid and will cause irritation to the esophagus if consumed on a regular basis.

Avoid products that contain alcohol and tobacco. Having an occasional drink will probably not do any harm but drinking on a regular basis greatly increases your risk for acid reflux. If possible, raise the head of your bed. This raises your head above your stomach and makes it more difficult for the acid to rise into the esophagus. When standing, always keep in mind you need to practice good posture. This not only helps keep the symptoms of acid reflux at bay, it also helps to prevent muscle pain.