According to the National Center of Health Statistics chronic sinus infection is one of the most common chronic diseases in the United States. When someone experience chronic sinus ,this infection will produce nose and sinus problems characterized by stuffy nose, loss of sense of smell, postnasal drip, nasal discharge, and head and face pain lasting three months or longer. It notably decreases vitality and general health,the quality of patients’ lives, impairing physical and social functioning, according to the Mayo Clinic researchers.

Indeed,Chronic sinus infection can have devastating effects on your life and can make you feel plain miserable. 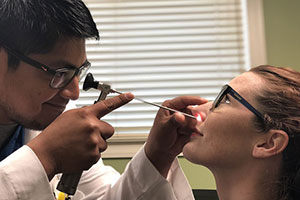 According to a study undertaken by The Mayo Clinic in 1999,it has been found that fungus is likely the cause of nearly all cases of chronic sinusitis.

Those Patients with debilitating and painful chronic sinus infections may no longer need to worry about developing resistance to the antibiotics they rely on for symptom relief. According to another Research undertaken by the Brigham and Women’s Hospital ,it has been shown that patients with chronic sinus infections do not appear to develop individual resistance to antibiotics when diagnosed and treated using a targeted approach.

The lead researcher of Mayo Clinic ear, nose and throat specialist Jens Ponikau, M.D teaches against what has been thought worldwide about the origin of chronic sinus infection: namely an inflammatory cells break down, releasing toxic proteins into the diseased airway tissue. They have discovered that these toxic proteins are released into the mucus, and not in the tissue. Therefore, scientists might have to take not only the tissue but also the mucus into account when trying to understand what causes chronic sinus infections and probably other airway diseases.

According to Dr Ponikau ,this findings could significantly change the way chronic sinus infection is treated as this finding suggests a beneficial effect in treatments that target primarily the underlying and presumably damage-inflicting nasal and sinus membrane inflammation, instead of the secondary bacterial infection that has been the primary target of treatments for the disease.

Causes and Treatments of Eye Allergies