Self-Injury: How to Stop this Dangerous Practice 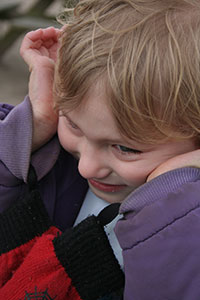 Because autistic children are unable to communicate through language the way that others can, they often feel frustrated at not being understood or at not getting what they need or want. Thus, autistic children may commit self-injury, by banging their heads or biting themselves (among other tactics), to release some of that frustration that cannot be communicated through words. Also, self-injury is a way of getting attention. An autistic child’s frustration goes hand-in-hand with wanting attention. For instance, by scratching oneself until one bleeds, the autistic child will immediately get someone’s attention, and this person will work to understand what the child wants or needs.

This theory of frustration and attention has been the sole thinking for quite some time. Recently, however, studies have shown that self-injury can have a biochemical component that relieves some of the pain and frustration one feels by releasing endorphins, or “happy hormones,” into one’s system. The endorphins also provide a release for the autistic child, allowing him or her to temporarily forget about his or her frustration and pain. Furthermore, it is believed that if one practices self-injury enough, the endorphins will begin to help mask any pain associated with such behavior, making it an addictive action.

While some professionals say that ignoring the autistic child’s self-injurious behavior is an acceptable method of treating such practice, this can obviously be very difficult. Others have suggested that communication therapy and drugs may help an autistic child by providing him or her with another method of communication. There are drugs that will help stem the addictive behavior of releasing endorphins into the system, and thus help stop such behavior. There are also nutritional solutions available; vitamin B6 and calcium have been said to help many families with an autistic child.