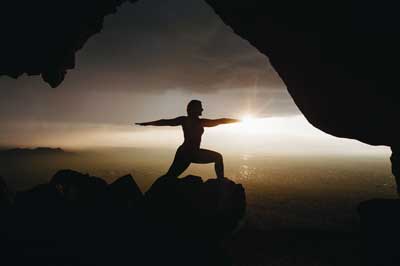 The various postures of yoga have long been used as a basis for the stretching moves that are prescribed for athletes or used in other forms of exercise. It’s no surprise, then, that a flood of yoga videos are on the market.

Here’s a look at yoga videos, from the most difficult to the most basic. The only thing you need to get started is comfortable clothes and a non-skid surface like a sticky mat.

This tape, led by Los Angeles instructor-to-the-stars Mark Blanchard, is the yoga version of boot camp. It’s 85 challenging minutes of constant movement designed to build strength and endurance, with Blanchard leading a class of 13 men and women.

The tape is billed as appropriate for all levels, and there’s a 5-minute segment at the beginning that offers a quick summary of how to do many of the basic yoga poses in the tape.

But that’s not enough for novices, and the rest of the tape is far too strenuous for those who aren’t extremely fit. You can tell that Blanchard isn’t very interested in newcomers to yoga because he ignores the poor, fumbling fellow in the back row who has little flexibility.

Despite these deficiencies, this tape is wonderfully challenging and effective workout, judging by the sweat that pours off the members of the class. But unless you’re already in good shape — and by the standards of this tape, that means you can do push-ups, balance easily on one leg and have abs of steel — you’ll be better off with an easier tape.

This routine provides a great introduction to the strength-building postures of power yoga. It’s taught by Lisa Bennett, who leads two exercisers through the 55-minute class.

One exerciser is a beginner; the other is more advanced. Beginners will be heartened to see that Bennett devotes plenty of time to helping Gina, the beginner, find modified versions of the postures that allow her to complete every segment of the routine. And veterans can learn much from her work with Charles as she guides him into more challenging moves.

One of Bennett’s major strengths is her ability to provide clear, detailed descriptions of proper form, from the angle of a bent knee to the direction of an extended arm.

Though there’s hard work to be done in this routine, Bennett’s comforting tone and understanding demeanor make it pleasurable.

The Importance of Physical Fitness

Be A Man of Fitness