Goji Berries are an exotic superfood that originates from Asia. The goji berry is also sometimes referred to as Wolfberries or Lycium Barbarum. In many parts of Asia, goji berries have been popular for a number of years and have been consumed for their medical and healing properties. However, it is only recently that they have started to become popular and well known in the Western world. 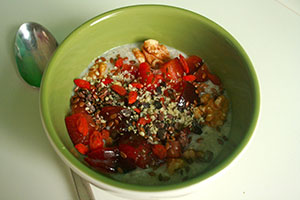 Himalayan Goji Berries are grown in the pristine unpolluted valleys of the Himalayan Mountains and they are one of the most nutrient rich foods that has ever been discovered. Goji berries contain more antioxidants than any other known fruit and they also contain more vitamin C than fruits such as oranges.

There has also been recent interest in goji berry Juice in the US. This is probably largely due to a company by the name of FreeLife that has been aggressively promoting goji berry juice using network marketing techniques. Personally I would stay away from this company because it seem like their products are way overpriced and they have been known to make misleading health claims that are unsupported by scientific research.

As of yet it is not clear as to whether goji juice loses nutrients during the juicing process, and also it is often diluted with other ingredients when it is made into juice. I would suggest that it’s better to eat dried goji berries, rather than too drink the overpriced diluted juice.

Also you should make sure that you are getting actual Himalayan goji berries and not the cheap wolfberries that are grown in the low lands of China where there is more pollution and the air is not very clean. Many people now consume goji berries on a daily basis because of the amazing nutritional and health benefits that they have.